This year at the PREA&DW the league member was awarded as follows: 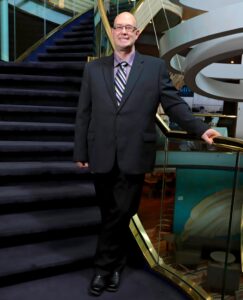 Dwayne Thomas has been instrumental in numerous areas of the Army Cadet League this year and we are honored to announce him as the League Member of the Year.

As the new Treasurer for the Southern Zone, he was able to finish up existing tasks, bring everything up to date and provide accurate financial statements to the membership at general meetings.  As the SZ treasurer, Dwayne felt it was prudent for him to step into the Interim-Treasurer role at another cadet corps where the local CSC has been disbanded and was paramount in getting all their financials caught up and submitted to the proper authorities.

Dwayne has been mentoring and assisting other cadet corps to help complete their financials and submit them to the Provincial office.  He attends meetings with other corps to advise or educate where possible.

Dwayne is the Screening Governor for Alberta and has been a huge asset getting everything caught up, cleaned up and even modernized with setting up the website so applications can be completed online.

Dwayne was the driving force for the Branch’s change to the National formatted webpage; he completed the transition to the new template, developed the process for online volunteer screening, online corps financial submissions, online League Rep reports, and even online membership renewal, PREA&DW registration and electronic fund transfers.

Dwayne is always willing to listen to member’s ideas on how to better utilize the Branch website and trying to determine how to make it happen.

Dwayne has also been figuring out how to make uniform League email addresses a reality for the corps’ and the BOG.

Dwayne is the current Chair for 3025, a position he has held for several years.  He regularly attends parade nights and holds a close-knit working relationship will all the staff and other CSC members.  He provides extra support at almost all FTX’s and acts as a strong cadet program advocate throughout the community.

Dwayne was one of the main members instrumental with the SZ Cookbook fundraiser; he helped collect all the recipes, input all the information onto the webpage, promote the sell of the books and distribute the books as required.

Dwayne was a huge component in the Globalfest activities the summer of 2019 and would have been again for 2020 if not for the COVID restrictions put on place for public gatherings.

Whenever something is needed to be done, Dwayne will go out of his way to make it happen.  He has a passion for the Canadian cadet program that is rarely seen and a pleasure to watch.  For everything he has done and accomplished this year, We are absolutely honored to announce Dwayne Thomas as the recipient of the Joanne Nilsson League Member of the Year Award.